There are 110 towns called Newcastle in the world. Newcastle upon Tyne is one of them. This project aims to find out what goes on in the other 109 - and what happens when you start to create links between them.

There are Newcastles of all sizes and on all continents (except Antarctica). From a tiny hamlet of 40 people in the USA to a sprawling South African city. An ancient Montenegrin spa town to a village overlooking Banana Bay, on a beautiful speck in the Caribbean. Many of the Newcastles in the English speaking world are named after towns in the United Kingdom, and are linked through a colonial past. Others such as Shinshiro in Japan and Neuchâtel in Switzerland are – like our own Newcastle – simply places where someone once built themselves a brand new castle.

Using the internet and existing social networking media Newcastles United will build an online community where people from the Newcastles of the world will be able to get together, create content, exchange ideas and find new opportunities within strands such as filmmaking, sport, food, music, art and education. Newcastles United will create an online platform capable of delivering product and content to a potential audience in excess of 20m people - who all have at least one thing in common … They live in a place called Newcastle.

Stimulating user-generated content through online festivals and competitions, the project will encourage individuals and groups to show us how they live and work and play. How they solve the problems and challenges of life. It will allow people to celebrate and share their cities, their communities and their culture. Using Facebook and other networking tools Newcastles United is already in contact with thousands of ‘Novocastrians’ throughout the world. We will work with natural networkers to establish new networks between diverse communities and individuals. We will seek to create links between artists, school children, artisans, sports teams, chefs, filmmakers, photographers, academics …people across all ages and all demographics.

The unique user-generated content and the newly emerging networks will provide the raw material for the documentary project. The project will encourage people to meet up, to give and receive gifts and hospitality. People will be encouraged to stage their own events, to collaborate on artistic projects or business ventures. The documentary will film what happens. New friendships, alliances and rivalries will form and opportunities for learning and growth will emerge. The film will document this process while weaving its way across the world. The format of the film will allow for celebrities and Newcastle’s characters to contribute along the way – as a presenter, an emissary or just to show off the place where they live or grew up.

The film will both document the growth of the Newcastles Network and will be a reason for individuals and organisations to get involved in the developing network. The growth of an innovative and relevant Newcastle network will provide the raw material for this original documentary film and for a myriad of future ventures.

Newcastles United will generate new friendships, alliances, strategic partnerships, knowledge-transfer, user-generated content and multimedia intellectual property - creating business opportunities for branding, sponsorship and advertising via an on-line distribution platform with the potential to have a huge impact on tourism, sport, culture and education.

Newcastles United is a model and a format which can be replicated all over the UK … and ultimately all over the world, creating … The World United.

We are currently developing the documentary proposal whilst simultaneously documenting that development, creating on-line/cross media content and establishing pilot projects that are building the community, the audience and the appetite for Newcastles United and all of its constituent parts.

In the true spirit of the multimedia world, the research and development of Newcastles United is used to generate create content and build an audience, community, market and appetite for further product whilst also stimulating user generated content and further developing relationships with strategic partners, collaborators, sponsors and commissioners. 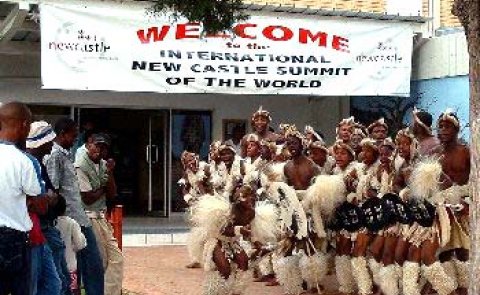